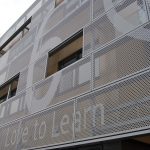 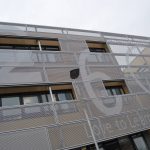 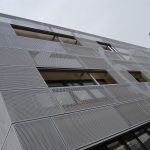 A complete and highly innovative through-wall design by Ash & Lacy played a key role in the complete redevelopment of Christchurch Primary School in Burton-on-Trent. The building’s eye-catching facade comprises approximately 900m2 of VariAL TF rainscreen cladding in a gold metallic Larson ACM finish. It also features a projective outer façade of VariAL H rainscreen in 3mm RAL 9006 white aluminium PPC with bespoke perforated patterns, meeting the requirements of client Staffordshire County Council’s architects and incorporating the slogan “Love to learn, Learn to Love”, plus other graphic elements across the building, including musical notes and a clock face.

The VariAL H panel configuration required for this project was particularly noteworthy. Rather than deploying a more traditional vertical arrangement, panels had to be laid horizontally. To achieve this, Ash & Lacy implemented a thorough engineering review of the product, devising additional reinforcement brackets specifically for this application. Ash & Lacy Steel Frame System metal was also used as secondary steelwork support for the ACM inner facade. The S150 horizontal support system was also designed in such a manner to reduce the visual impact of strengthening and stiffening elements behind the facade. Fixed to a series of unequally positioned hot rolled vertical posts, the mullions needed to span large distances without the use of anti-sag bars and keeping the connections as visually clean as possible.

We use cookies on our website to give you the most relevant experience by remembering your preferences and repeat visits. By clicking “Accept”, you consent to the use of ALL the cookies. However you may visit Cookie Settings to provide a controlled consent.
Cookie settingsACCEPT
Manage consent

This website uses cookies to improve your experience while you navigate through the website. Out of these cookies, the cookies that are categorized as necessary are stored on your browser as they are essential for the working of basic functionalities of the website. We also use third-party cookies that help us analyze and understand how you use this website. These cookies will be stored in your browser only with your consent. You also have the option to opt-out of these cookies. But opting out of some of these cookies may have an effect on your browsing experience.
Necessary Always Enabled
Necessary cookies are absolutely essential for the website to function properly. These cookies ensure basic functionalities and security features of the website, anonymously.
Functional
Functional cookies help to perform certain functionalities like sharing the content of the website on social media platforms, collect feedbacks, and other third-party features.
Performance
Performance cookies are used to understand and analyze the key performance indexes of the website which helps in delivering a better user experience for the visitors.
Analytics
Analytical cookies are used to understand how visitors interact with the website. These cookies help provide information on metrics the number of visitors, bounce rate, traffic source, etc.
Advertisement
Advertisement cookies are used to provide visitors with relevant ads and marketing campaigns. These cookies track visitors across websites and collect information to provide customized ads.
Others
Other uncategorized cookies are those that are being analyzed and have not been classified into a category as yet.
Save & Accept